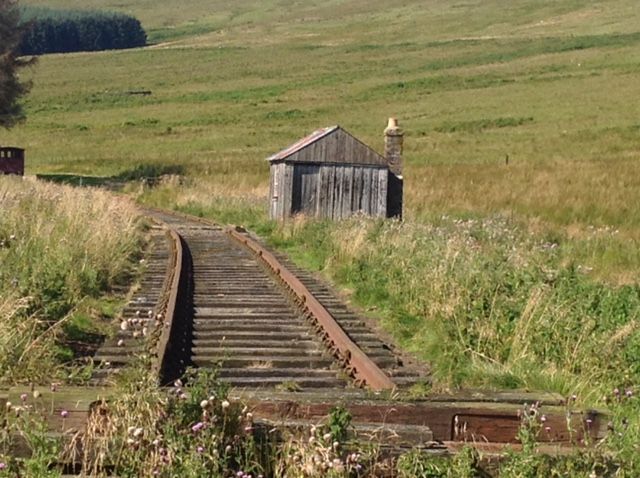 Many customers have enjoyed their stay at our B&B. Please find some of our customer reviews below.

“Saughtree Station is a beautifully restored railway station built in 1862. Situated on the long closed Border Counties Railway, with its own train, it is a very cosy B&B for 2 people with single beds. Rob and Rach are ideal hosts. Nothing is too much trouble. Breakfast is superb. There's plenty of tea coffee and bread so you can have a drink or slice of toast anytime. Evening meals are also available by prior arrangement. We had roast chicken which was delicious. You can walk the old trackbed in both directions, wellies advisable. A wonderful peaceful place. We'll certainly be back.”

"Saughtree Railway Station is one of those places you can describe but can't appreciate unless you've visited. Rob and Rach are the perfect hosts and nothing is too much trouble for them. Tea coffee and snacks are readily available. Rob's breakfast just right. They also do evening meals and ours were cooked to perfection. This time we also met Geoff who proudly showed off his train. Perfect for rail enthusiasts, walkers or someone who wants peace and quiet. Only sleeps two in single beds. Highly recommended."

“A cycling friend and I had the pleasure of staying here in April 2017. Rob and Rachel could not have done more to make our stay special. The place has been thoughtfully converted with a wonderful attention to detail. Amazing views, immaculately clean and beautifully presented. A huge amount of thought has gone into the place and it shows. If you are looking for a place to stay near Kielder or Newcastleton- I'd highly recommend this place- simply delightful...”

“A lovely piece of history in peaceful surroundings”

“My daughter and I stayed here for two nights, whilst visiting Kielder Observatory. The station rooms are self-contained and very tidy and well kitted out. Rob and Rachel really went out of their way to make sure we were comfortable and well looked after. Fruit, crisps and nibbles were supplied, and breakfast was a real treat, too! The rooms have some photos of the railway in its heyday and a full history of the site is available, too. The station is in an excellent location when visiting Kielder Observatory. Nearby Jedburgh Abbey is also well worth a visit, too. I would strongly recommend this location to future travellers.”

“Beautiful Location with Lots of Character”

“Situated a short drive off the main road the station is set in the open countryside just sheltered by a few trees. The station has been beautifully restored and my room had lots of original photos of the old railway line and the station in its heyday. I had a wonderful welcome and was shown all the facilities, including fridge stocked with milk, soft drink and treats. There were homemade biscuits on the table and the rooms were so clean. A had a wonderful night’s sleep and a delicious breakfast was served in the eating area of my suite overlooking the borders countryside. Almost certainly the best B&B I've ever stayed in.”

“Don't miss this unique B & B property you wont be disappointed.”

“I can honestly say we were really chuffed to find Saughtree Station B & B. We needed somewhere to stay near Kielder Observatory and Saughtree Station fitted the bill perfectly. The converted station is a wonderful place to stay if you want peace and quiet, you have the option of having an evening meal and I would recommend having this as Rob and Rachel the owners fed us like royalty. Breakfast was also wonderful with plenty of choice. There was a fridge with soft drinks which you just help yourself to, not to forget mince pies, homemade biscuits etc. If you are a fan of trains you will be in your element as there is a beautiful train (Saughtree Meg) just a few feet from your door. This train does work and on occasions is fired up and rides are available. Don't miss out on the opportunity to visit this unique property.”

“The Saughtree Station bed and breakfast is fun by a wonderful couple who will go above and beyond to help. The accommodations are clean and well equipped and fun as they are in the original train station. The local area is great to explore and spend some peaceful time.”

“A well known restaurant critic once made the point that it is a waste of time to try and search for even more superlatives about a place when all those that come to mind have been quoted already, and that is certainly the case here. This is without doubt a B&B that the vast majority of travellers will not have envisaged or imagined, let alone visited. So where to start? These comments relate to our visit between 9th and 12th July, booked in February after having seen an advertisement in The Railway Magazine.

The idea of staying in a converted country railway halt in a remote area appealed, and remote is sure is; rest assured that you would not just "happen to pass" this place and pop in. You have to learn about it, decide to stay and then go and look for it in The Borders, an adventure in itself, but once having found it what an experience awaits! On a first visit nothing prepares you for the delights that lie in store. From the truly friendly welcome that Rachel and Rob extend and the quality of the two inter-connecting bedrooms, to the fantastic breakfasts (and pre-bookable evening meals) and unspoiled peace and quiet high up in the Borders hills, a visit here is a pleasurable assault on the senses that has to be experienced to be believed and accurately described. TV, WiFi, and radio are all available but there is no mobile phone coverage; boo hoo!!! Rob and Rach themselves describe Saughtree B&B as "quirky" and it is indeed light years away from the likes of the landladies establishments of Blackpool and Scarborough. With Newcastleton 9 miles away in one direction and Kielder National Park 15 in the other (and Hawick or Jedburgh even further) the little station lies on the long abandoned North British Railway, which once connected Morpeth with Carlisle via the even more remote Riccarton Junction. Rach's dad has re-laid a couple of hundred yards of track through the platform, upon which sits a diesel shunter ,two wagons and a guards van, and you could well wake up to see some sheep on the platform as if on their morning commute. It's all surreal in it's own way, and you can almost imagine Harry Potter's Ford Anglia zooming over the tops of the hills that loom above. Beyond words! When the time comes to bid farewell to Rachel and Rob, you are saying heartfelt thanks to two new friends for their truly wonderful hospitality. And you are saying "au revoir" not goodbye, because you just know that you will have to come back. Thank you so much, you two, for the experience.”

Contact us in Newcastleton, Roxburghshire, to book a room in out B&B, which is situated in the countryside.